This article was adapted from the SONAR Ipswich Update PDF.

Thanks to direct synth recording, bouncing is no longer necessary to convert a virtual synth output into audio because you can now record the synth audio in real time. The main advantages to real-time virtual instrument recording include:

Selecting an Instrument Output as an Audio Track Input

An instrument’s outputs show up as available inputs on the Input widget for any audio track. 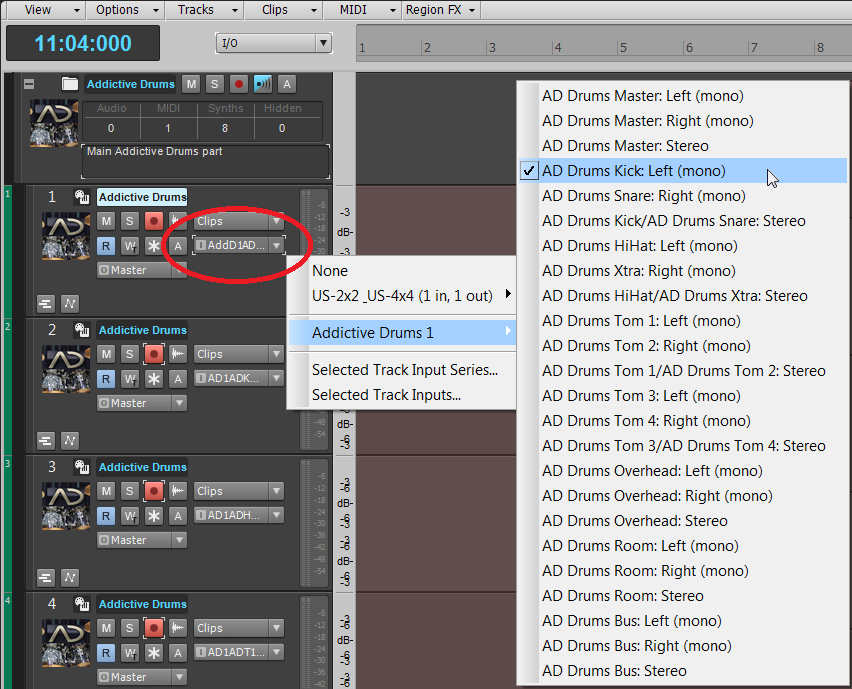 Simply select the input as you would any other available audio signal, and arm record. Also note this works for Console view. If a project includes multiple instruments, each has its own input selector to avoid clutter. 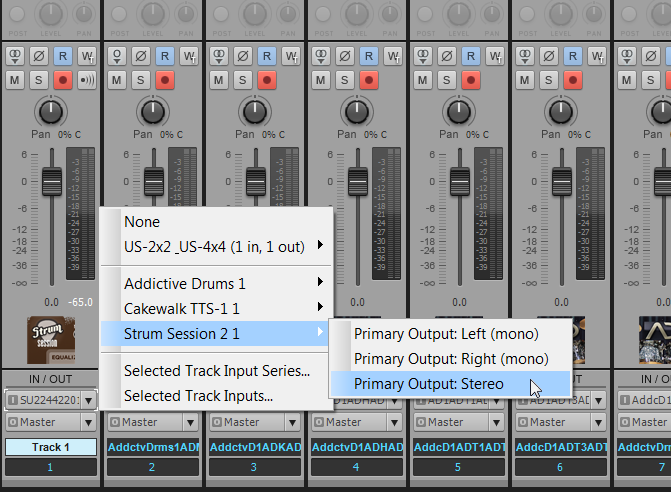 Recording works the same as recording audio, including punch recording, loop recording and take management, and of course you can record multiple outputs simultaneously on multiple tracks. 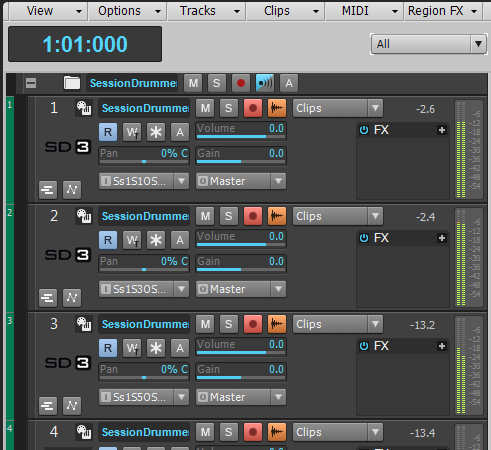 When enabled, SONAR’s “Smart Mute” mode for virtual instruments automatically mutes both the synth audio and MIDI tracks if either one is muted. This is the preferred behavior with virtual instruments having multiple outputs, because you generally want to make sure all audio outputs are muted when you mute the MIDI track driving them.

However, with direct synth recording there may be times when you want to mute some audio outputs but not others, so it’s now possible to disable smart mute in the Browser. Click the drop-down menu on the Synth tab to enable or disable smart mute. This is global and affects all synths. 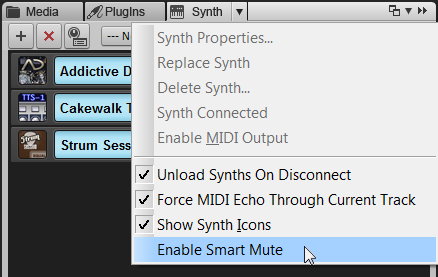 Style Dials were introduced in Music Creator 7’s MixStrips as easy-to-use, single-knob controls—often controlling multiple parameters simultaneously—to speed up workflow when looking for a specific effect. Because they’ve proven to be surprisingly popular, it didn’t seem right that these weren’t available to SONAR users.

So, the Style Dials have now been ported over to ProChannel versions for Professional and Platinum users. The names are pretty self-descriptive, but here are the basics.

And for a peek into the future, we’re planning some more Style Dials …so stay tuned.

If you’re a SONAR Artist user who’s been looking longingly at the ProChannel in the Professional and Platinum versions, this is the update for you: MixStrips, first included in Music Creator 7, have now been integrated into SONAR Artist. And to kick things off, you’re getting the Grit, Max, and Space Style Dials—for details, see the descriptions above.

MixStrips add considerable value to the basic SONAR version, and give a taste of the ProChannel flavor. What’s more, any future Style Dials introduced for Music Creator will also be compatible with Artist’s MixStrips.

Previously, you could create and save your favorite parameter presets for both exporting and bouncing. In the Bounce to Track(s) or Export Audio dialog boxes, you simply choose the desired preset from the drop-down menu. 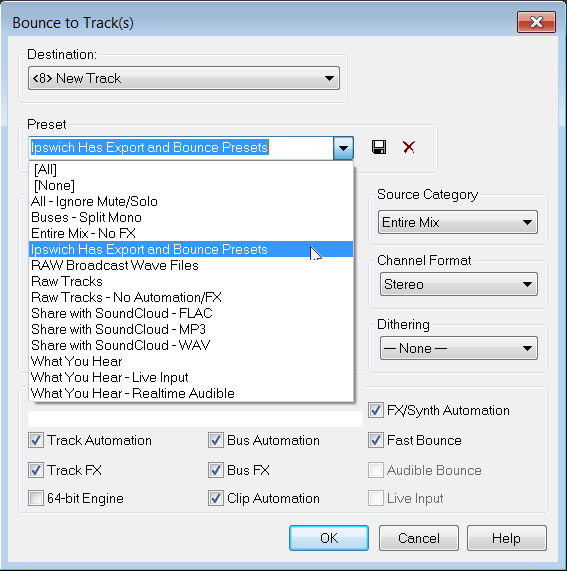 However for your added convenience, the settings in the export and bounce dialogs now persist in projects and templates (not the presets themselves). For example, if you change the settings in the Export dialog and save a project after that, the next time you load that project, those dialog settings will be restored. This is very useful when you want to return to the last settings used on a per-project basis.

The PNG (Portable Network Graphics) file format for graphics is the most popular lossless image compression format on the internet. Unlike GIF, the compression algorithm used in PNG format graphics is not patented, and due to it also being lossless, PNG files do not have the artifacts associated with JPG files.

For SONAR, the primary benefit with PNG files is that they support transparency correctly. Rather than a pixel either being transparent or not, PNG icons can support levels of opacity. This will allow for more modern-looking track icons in the future, and meanwhile, users can more easily take advantage of transparency for smooth blending with colors and backgrounds. 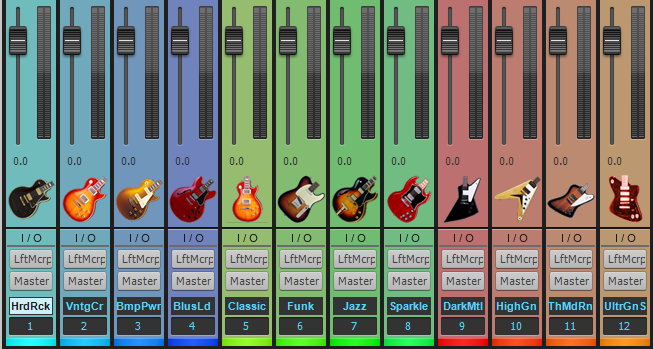 Also note that you can configure the size of small and large icons in the Cakewalk.ini file. (This is located in your user AppData folder. Windows defaults to hiding this folder, so you may need to open Folder Options and under the View tab, click Show hidden files, folders, and drives.) By default, small icons are 32x32 pixels and large icons are 48x48 pixels. To change the default size, use the following INI variables: 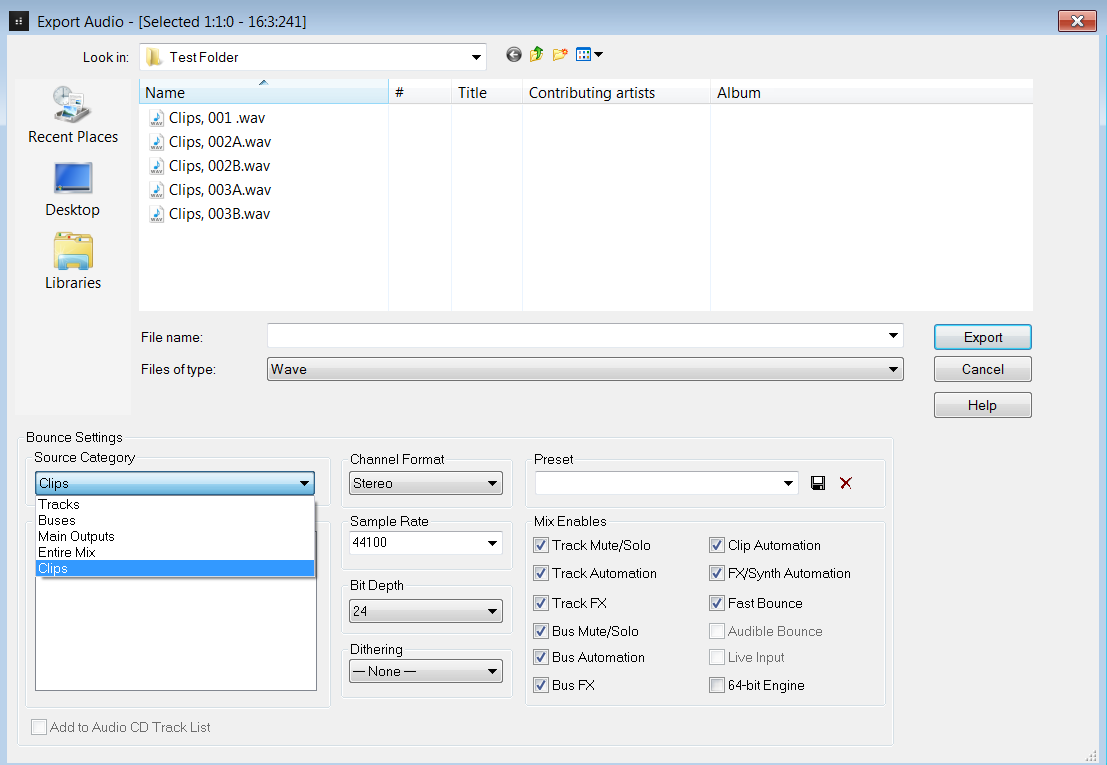 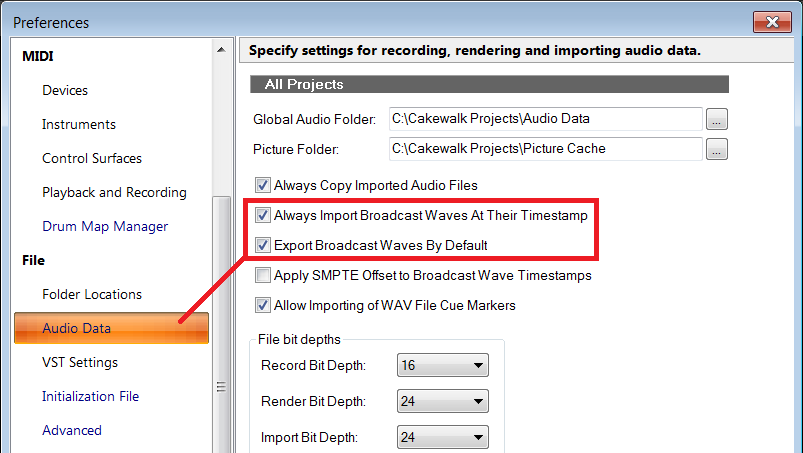 There’s one caution involved in Broadcast WAV import: Some loop and sample libraries time-stamp the files at arbitrary times, like 1:00:00 hours. If Always Import Broadcast Waves At Their Timestamp is checked, then these will import way down the timeline, so you may not be aware they’ve been imported.

When exporting clips, SONAR traditionally exported only the audio defined within the clip itself. For example if there was delay or reverb, either as a track effect or as an effect inserted in a clip, the delay or reverb “tail” would stop whenever the clip ended. To include this tail with a clip effect, you needed to add enough silence at the clip end to accommodate the tail. With a track effect, you needed to add sufficient silence to the clip, render it, and then export.

Starting with Ipswich, none of this is necessary because you can specify a time to accommodate a tail when exporting a clip. Simply choose Preferences > Audio Data, and enter the desired Clip Tail Duration. There is no practical limitation on how long the tail can be.

The Ipswich fixes and workflow enhancements are available in their own knowledge base article.