Mackie Control and Mackie Control XT (the expander modules that add 8 additional fader/control sets to the system) use MIDI to connect to the computer. Each Mackie Control or Control XT requires a separate MIDI I/O, so a typical studio setup of 24 channels of I/O will require 3 MIDI inputs and 3 MIDI outputs.

Configuring the Mackie Control is about as easy as it can get. Even when configuring multiple Controls, setup can take as little as 10 seconds. For this discussion we will assume that you already have a MIDI interface properly installed. We also will assume that you have installed the latest update for SONAR available here: http://www.cakewalk.com/Support/SONAR. If you using SONAR 2.0 it did not ship with Mackie Control Support, so you will need to update to 2.2 before you can use it.

After plugging the Mackie Control and any XT's into individual MIDI I/O ports, all you need to do is launch SONAR, and then go to the OPTIONS | CONTROL SURFACES menu, click "ADD" and select Mackie Control from the dropdown menu selections.

To configure multiple Mackie units such as a Control and a couple of XT's, open the OPTIONS | CONTROL SURFACES menu, click "ADD" and select the Mackie Control XT's as seen in the window. Now open the TOOLS | MACKIE CONTROL menu and select the large "CONFIGURE LAYOUT" button found in the bottom right corner. This will launch the configuration system in the Mackie hardware. On the Control, start by turning the first rotary pot on channel one, so that the Control is acting as the channel number sequence you wish it to control. In our studio, the Control is the last unit to the right on the system, so it's configured to operate tracks 25-32. Now rotate the XT units so that they are controlling the desired groups of 8 channels. Press "Configure Layout" on the computer screen to close the configuration utility. That's all there is to it.

At Sundance Media Group, we've selected the M-Audio 8x8 to provide I/O for the Mackie Control and 3 additional XT's, bringing our control capability to a total of 32 channels in our A room. The Mackie Control by itself is capable of managing 128 channels, so additional Control units or XT expanders aren't really necessary. However, when working on a mix and the vocal is on track 24, the kick is on 1, snare is on 2, and guitar is on 15, it's VERY handy to have multiple units that can be grasped simultaneously. This is particularly true if you come from the analog/fingers-on-the-mix world. I'm from that world, and the idea of sifting through a menu, even if it's a one-button menu to get to additional channels simply doesn't appeal to me.

The B room at Sundance Media Group has the Delta 1010 audio interfaces for audio I/O, so we use the MIDI ports on the Delta to interface with the Mackie Control.

The Mackie Control is far more than just a mixer. It's a total access control surface. EQs, compressors, aux sends/returns, metering, and control of soft synths are just the beginning of what this little baby will do. Literally, the Control may be configured to completely eradicate the mouse from the system. (That's the whole idea!) Configuring SONAR to personal needs is as simple as going to the TOOLS | MACKIE CONTROL menu and selecting the options available. The 8 custom configurable buttons may be set up to launch windows within SONAR such as the Loop Explorer, Piano Roll view, Loop Construction view, etc. Any window or parameter of SONAR may be launched from these buttons. 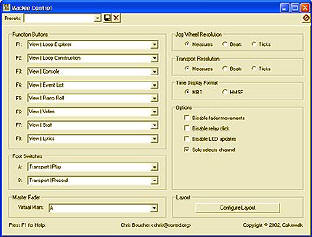 The two footswitch inputs on the back of the Mackie control may be configured for punch-ins, start/stop of playback, or whatever else might be desired. In a one-person home studio, this is very useful as a footswitch may be run from the control room to your isolation booth (a.k.a. the bathroom or bedroom closet), allowing remote control of the recording system.

Other setup menu options allow for controlling jog shuttle speed settings, time display formats, and transport resolution. Zooming in or out on the timeline in SONAR will control the accuracy at which various behaviors in SONAR will operate. Editing a volume change in SONAR while zoomed in deep will provide sample-accurate changes, while working in a more zoomed-out view will be less accurate. Jog shuttling is faster when zoomed out, and may be locked to the SONAR grid for maximum accuracy and quantized changes.

Arming a track for recording is fast with the Mackie Control. Simply hold the "ARM FOR RECORD" button on the Control, press the rotary pot on the channel you wish to automate, then press play/record on the Control. SONAR will begin playback, and you can do your mix with full automation. The Mackie Control may be configured to arm any parameter of SONAR that is automatable.

This same ability is available for controlling parameters of many DirectX 8 audio plug-ins, or VST plug-ins that have been wrapped using the Cakewalk VST Adapter. This will grant physical access to controls found in WAVES, Cakewalk, Sonic Foundry, Ultrafunk, PSP, and other plug-ins. For those using soft synths such as the Native Instruments Pro52, B4, or Kontakt, etc, you'll find using hardware knobs much more fun to play with than mousing around for that special tweak. Users of the UAD-1 hardware processor from Universal Audio and Mackie will also enjoy having access to real knobs for tweaking parameters, especially in the knob-heavy Nigel guitar processor.

One of the drawbacks of the all-digital studio has long been having to rely on a mouse for mixing, causing frustration, eye and wrist strain, and hours spent trying to make a mouse-created fade sound more human. With the optical/touch sensitive Penney and Giles faders found on the Mackie Control, this is no longer an issue whatsoever. Fades respond and sound exactly as they do in the analog mix, except now there is no pot noise or crackle from the fader sitting in the same place for months. With automation, mixes are recalled at the press of a button. Any tweaks needed for a fade or volume adjustment may be updated using a fader on the control, or by using a mouse in the SONAR track view. The Control manages MIDI information in the same manner it operates audio, due to it's superior implementation of drivers by Cakewalk.

Channel management becomes easier, as any name placed in a SONAR scribble strip is immediately seen in the Control display.

The only drawback I found with the Mackie Control implementations, and for me it is a mater of personal taste, is the audio metering. The Control is capable of displaying audio meters as either ladders or numbers. When using the Mackie Control with SONAR, the metering is represented in a numerical fashion. I find it difficult to follow moving numbers as opposed to seeing peaks in a ladder-type meter.

After several weeks of testing, abusing, digging, and working with the Mackie Control I think I'm absolutely addicted to mixing without a mouse. So for you old-world artists, engineers, and high-end hobbyists, it's time to cut the cord and send the mouse back to the hole it belongs in. The hybrid of digital precision and the tactile needs of the analog world have finally converged in the combination of SONAR and the Mackie Control.